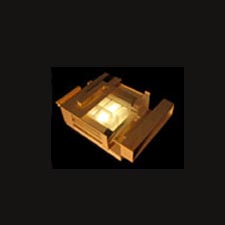 Strukturer was the lone release from the short lived netlabel imprint, Arkitekton. We loved it so much that upon the news of Arkitekton folding we hounded Jimmy Svensson aka Partikel to rerelease it somewhere - somehow. Lo and behold, here it is given new life. Including 2 new tracks and 3 new remixes from some favorite members of the One camp.

This beat heavy excursion into minimal techno has a driving confidence and strong prescence with which it excells in theme and seperates itself from other techno releases. The mixes by Ronny Pries, Plosive, and Adrian Leverkuhn then take the original underlying qualities of Partikel's style in different directions through the interpretation and exploitation by three unique remixers - crossing the spectrum of dub, techno and glitch.

Partikel's release Strukturer it seems was original released on Partikel's on Arkitekton netlabel.. not sure what happend to it or if anything else came out through them. Searching google didnt turn up much but I did manage to find a couple reviews on the original release. All of them rate it highly and apparently so do I. It's great that One managed to find the original release and want to put it back out there for everyone to take note. Specially with the recent rise in popularity of minimal techno on the `net.

Omstrukturerad seems to have added no less than 5 tracks to the previous release. samtidsrytmen, summeringen, and remixes by plosive, adrian leverkuhn (who _is_ this?), and ronny pries who each applied their own styles to the unsuspecting Partikel.

But this is a review of Partikel's music. His tracks are heavy and precise.. it can't be put any other way. Rarely do I hear aggressive techno in a manner where I enjoy it also on an atmospheric or repetitive listening level. I guess its just not my style.. but Jimmy has put together a great formula here and I hope its not the last I see of him. There definitly seems to be an x0x influence in heere somewhere but I can't quite place it. It may just be some of the percussion-ish instruments used.

Very climatic with loads of microscopic details amd sweeps and climbmatic events 000oo.. Omstrukturerad kept me in full attention in the sort of rhythmic way that IDM music usually does. There's a great blend of detail and sensibility here that keeps one015 from succumbing to the tiresome world of beat trickery.

Many people should take note of this release because as electronic music moves forward we'll keep seeing this merging of styles from opposite spectrums like IDM, minimal techno, ambient, 808 inspired acid music... yessir.,.net labels rule.

The standouts on this one to me are Arbetaren, Samtidsrytmen, Illusionen, and all 3 of the remixes specially of Likgiltligheten by plosive and leverkuhn. ..but like i've said before -- listen the whole way through to damn good records like this =!!!